Welcome to our countdown to the most anxiety-inducing horror films for parents!  Today is day fifteen!

Each day, we are covering the films I both love and hate because they’re awesome and they give me panic attacks now that I’m a mom. 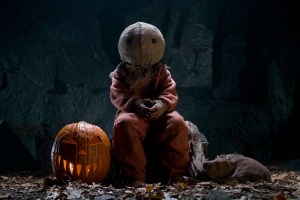 Today is the 15th and we are half way through our month-long horror countdown!  Today we are talking about another film based on the work of parapsychologists/demonologists; Ed and Lorraine Warren.  This one just happens to touch upon a prevalent subject in horror that tends to weaken the knees of even the bravest of horror connoisseurs.

Disclaimer: Trigger warnings are a given when you talk about horror, but I’m going to say it anyway.  Many subjects covered by horror films are disturbing to parents in ways we can’t possibly understand and each is unique to the parent and his/her experiences. Tread carefully and know your limits.  If this begins to be too much, there’s no shame in closing the window.  Also, this post contains some spoilers throughout.

Sounds like a great name for a band, right?  Seriously though!  Dolls!  Why do dolls scare people so much? The lonely teddy on an empty floor, slumped over and waiting for his child to scoop him up and kiss him seems ominous in the dim light or even in the middle of the afternoon. Dollies and action figures with their absent expressions of ambivalence suddenly seem to scowl at you from across a quiet room.  Even a hand-made doll filled with the energy of love from the one who made it can be placed just so on a shelf to appear as though it is quietly judging you, silently studying your every move… waiting for the right opportunity to jump down from it’s dusty perch and strangle you in your sleep.

The world of horror is no stranger to the creepy doll issue.  Child’s Play, Dolls, The Puppetmaster, Devil Doll, Tourist Trap and so many others have graced the silver screen and taught us to fear even the most innocent of toys.  But, what when there’s a good reason to fear that sweet dolly in the corner?  Or… wait, wasn’t she just in the bedroom?  …I swear I closed that door earlier….

Annabelle takes those preexisting anxieties we have about dolls and reminds us that sometimes there really is a good reason not to trust them.  It also expands upon the foundations of the haunted dolls of the past by infusing it with a true story and actual evil, not just the ghost of a bad guy.

Based on another case worked on by Demonologist and clairvoyant power team; Ed & Lorraine Warren, this chilling tale has enough truth behind it to give any parent with toys strewn around the house at all times a moment of pause before dismissing the feeling, “I swear I put this away 5 minutes ago…”

It also plays upon our sympathies and the reality that we too could get caught up in this terrifying situation because, really – who doesn’t want to help a poor little ghost girl to feel just a little less lonely?

Of course, we learn the error of compassion in cases like this and see exactly what happens when people who don’t know better mess with stuff they don’t understand.

But what is it, really, about this film in particular that gets to me and likely any mother watching?

The first few minutes of Annabelle’s movie has only a “flashback” scene that, if you have already seen The Conjuring, is a repeat just to bring you into the loop and make sure we’re all on the same page that the Annabelle from THAT movie, is in fact THIS Annabelle.  Once you get past this reminder of exactly what she is capable of, we then fall away from the supernatural for a bit to follow a young couple with child.

This is where you think you may be safe for a while, and you are right… until one of the most terrifying and common of all fear-scenarios ever imagined by any pregnant woman happens in vivid detail… she is attacked and stabbed in the stomach.

Of course it only gets worse from there… horrifying scares with the monster towering over the baby, ghost/monster things wandering around, demons running amok and of course, the doll who doesn’t die and cannot be thrown away.  But even with all that, the thing that got me even more were the constant visualizations of so many pregnancy and infant/mom fears crammed into one movie.  The worst being toward the end when she believes she has killed her own child, thinking her baby was the doll.  It was exhausting and I had to take breaks while watching it just to catch my breath and clear my head a bit.

So, this is a film for any mother’s worst nightmares come to life with a few nods to respected classics and horror giants such as Rosemary’s Baby, The Exorcist and even a touch of Poltergeist thrown in.  We’ve got a home invasion by cult members who stab our leading lady in the stomach in the first 15 minutes of the film, creepy baby toys making noise when no one is there, rocking chair sounds when there is no one sitting in them, random appliances turning on when no one is in the room… and even worse; a series of severely terrifying occurrences that happened to the mom when no one else was there to validate her.  The frustration of being ignored, patronized and not taken seriously, feeling like she is going insane and worried everyone else will think so, too, when she knows there was something terribly, deeply wrong going on.  Not being believed is one of the worst feelings one can experience and every mother will tell you, when you are a new mom, that happens a great deal.

The reality of this film’s battle is that it isn’t just against the terror experienced by those who have come in contact with the doll, but the absolutely real scenarios involved in the people who have come into contact with it’s evil.  It’s also all the terrifying imagery being used throughout the film.

When a dog barks at nothing, when a child warns you of a danger you assume is just their imagination, when you feel a presence and everyone tells you it’s just the wind and you probably need more sleep…

These are the the true horrors of this film because you are left with a heightened awareness but the rational mind explains away all things and sometimes, logic is wrong.  Will you know when to trust your intuition and when to allow logic to laugh it off?

When you consider all the dolls, toys and trinkets your children are given… the ones picked up at thrift stores, vintage items, consignment finds or things passed down from generation to generation, the reality is you just can’t know for sure where something came from or what it’s story really is and when they look so unassuming, how could you ever know?

Either way, you can bet I make triple sure now that the doors and windows are locked and the house alarm is set.  I have always taken every precaution I can to make sure my family is as safe as possible from all threats, no matter where they come from…. after this movie, I may need to up my game a bit.