Local Artists Share Their Love Of Zombies Through Gnomes

As we were walking through the endless isles of  vendors at Wondercon, a small booth caught our eye.   Gnomes, garden gnomes they were every where, but these were special.   They were ZOMBIES!! 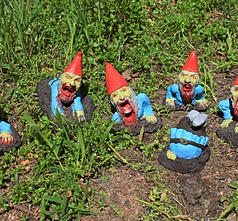 Needless to say we spent our money on these amazing little creatures.  As we were paying and gushing about them, our conversation turned to where everyone was from.  Everyone knows that Forbidden Panel is from the Inland Empire and that we are well known for our Zombie Beauty Pageant.  Come to find out, so were Chris and Jane, creators of the gnomes.   Generously, they granted us an interview.

How did you get started with the zombie gnomes?

Chris came up with the idea while driving down the 210 fwy. He was day dreaming about the zombie apocalypse and then thought what if gnomes were real; and if they were how would they react to the zombie apocalypse. Later he told Jane about it and she thought it was an amazing idea. So Chris sculpted up 2 different Zombie Gnomes and a survivor gnome and Jane painted them up just for fun. They showed them to a few friends and they loved it so much that they encouraged them to sell them on Etsy. That was in 2011 and since then we have sold over 4,000 Zombie Gnomes and shipped them all around the world. All of our Zombie Gnomes are handmade and painted and we hope to keep it that way.

What do you use as inspiration?

There is a wonderful book called ‘Gnomes’ by Wil Huygen that has inspired us with the gnomes stories and some of their designs.  As far as zombies are concerned we are inspired by Dawn of the Dead, Shaun of the Dead, 28 Days Later, Walking Dead TV show and comic books, Marvel vs. Zombies, Zombieland, and of course Dead Snow.  Also we are inspired by modern, cheese awful, garden decorations.  Who doesn’t want to make those a little bit more entertaining?

Where do you see your future going with the gnomes? Will you branch out from zombies?

We have actually started a new series called Game of Gnomes.  Right now we only have one sculpture in the series but more will be coming soon.

How can our fans find you online and future events?

You can check us out on:

So, check them out and let them know Forbidden Panel sent you!!  See you soon!